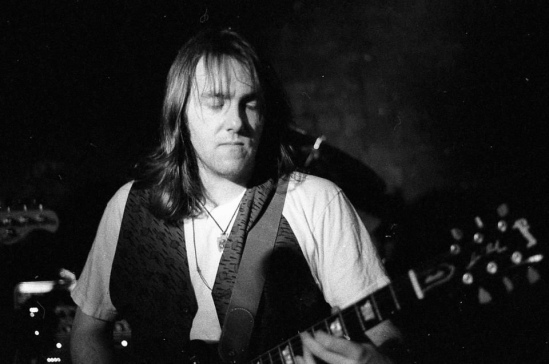 As Anthony Balsley’s last gig approached, Native’s rhythm guitarist, Mat Hutt stepped up to the plate, assuming the vaunted mantle of lead singer. Although, he’d been singing several songs per show since the start, it was a daunting task to step to the center stage, and he reminded us of the Jack Kerouac line, “Walking on water wasn’t built in a day.”

Stalwart fellows all, the band rallied around him, committing to rehearse relentlessly, and gig even relentlessier in the service of Mat’s lead singeriness, and maximum non-vexational, coming into one’s owniness..

The first point of business was to do some demo recordings with our new front man. The songs that drifted over from the Anthony era that Mat tackled — Down and The Sea were accompanied by songs Mat had a larger hand in developing.

Blue Room, an ode to a loo, had been demoed by Mat the previous year in his room at the Hippie Hotel. Anthony had sung it with the band (as heard in Nativology track 3), but now Mat repossessed it, and with the band’s fierce accompaniment showing the growing confidence gained from six months of constant rehearsals & gigs, Blue Room is where the funky side of Native really takes off. In many ways, it and Something Worth Remembering formed the foundation for the new sound the band was developing as it moved away from its hard-rocking infancy. Because, after all — if you move people’s butts, their hearts and minds will follow.

I Am was another demo of Mat’s (track 2) that had grown by leaps and bounds. It’s either a slow ska, or a fast reggae, but whichever — you can really dance The Twist to it. And, it shows the band combining styles, forming hybrids, taking creative leaps off the cliff in firm belief in a safe, aesthetically-pleasing return to earth. For a real kick in the pants, compare this track to the version that appeared on Native’s 2007 release, And Then What.

Interested Third Party was the first real band-written song, developed at Rob Smith’s Park Slope apartment. Mat came up with the chords, we all worked on the melody, and I (Dave Thomas, your humble narrator) wrote the lyrics, Johnnie on the spot! The subject matter provides a very serious juxtaposition to the jaunty arrangement, dealing with the sad story of a lady who is committed to a relationship with a man that can only fail spectacularly, as observed by a friend who stands condemned to watch helplessly from afar — the ‘interested third party’. Our lawyer loved the title of this one, and I must admit — it’s a personal favorite of mine, too.

(Note: Blue Room and I Am are the original mixes from December, 1992. The multi-track tapes are available, but require more work than can be mustered at this time. Perhaps a time will come when they can get a proper new mix, but for now — this is how they sounded when Rob & Mat mixed them. Interested Third Party is a new 2012 mix.

Next week: The Woodman Cometh!