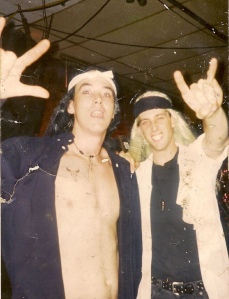 Anthony’s last gig with Native was at Nightingale Bar on December 10, 1992, which means it was Mat Hutt’s first gig in the role of front man. But, it’s also the night of another seismic occurrence in the band’s timeline — John Wood sat in on percussion & vocals — and although he would be there for every gig from then on, there was no official moment where he was made a full member, nor did there need be such a moment. He simply was in the band, no question’s asked.

I remember smiling through the whole gig. Not only was Mat going to work out fine, but I was loving the cross-rhythms Woody & I were hitting from note one. The listener might be excused for wondering why I wanted another drummer in the band when I was doing such a splendid job by myself! But, the fact was that I was doing some deep listening to The Meters, and I yearned for the interplay, the syncopation, the luxury of laying back into a fat groove and letting the percussion fill in the cracks like grout around large slabs of tile.

Now, to be sure – Woody was already hanging with us, either at The Radon Room, or he’d be there when we returned to the flat Mat & I shared upstairs from him on 16th Street. Woody had been working on his own recordings in his Hellbent Studio, and that is where today’s first track originates. The first part is a story as only Woody can tell it, where he mentions the band. He also name-checks a song he & I wrote – Mad About You.

This was way before the hit TV show of the same name, and I’ve always thought we missed a trick by not finishing it. The licensing money would have been substantial if they’d used this very catchy tune!

Woody’s Story Hour/Mad About You

Next, we have one of our best early songs, recorded by Rob Smith to two track cassette, which shows precisely everything Woody brought to the band, and how quickly our sound changed. It was in this fertile period that we really became the band that people came to know over the next decade.

So, Woody was in, our sound was forever changed, and 1993 would be a very big year, indeed.