The soundtrack to this week’s Cornbread Wednesday is:

In our last exciting episode, we heard Anthony’s version of the hard-rocking Native.

In December, 1992 Anthony Balsley (he of manly voice and ballsy name) left the band on very amicable terms, indeed he would continue to join us on stage for a raging version of Balloo many, many times.

Now, the band had to make a decision — who would be the next lead singer?

The logical choice was Mat Hutt, who was singing several tunes anyway, and he knew all the ones Anthony had sung. So, it’s no coincidence the next two recordings were Mat doing versions of songs Anthony had done at the gigs. The band had recorded the tracks in November, with Mat overdubbing his new lead vocal in early December. Sadly, Anthony’s original vocals were wiped in the process.

Technical note: Remember, these mixes are from multi-track tapes in the Native vault. They were done in the spirit of exploration, but the means at hand were relatively primitive. Mat Hutt owned one of these:

A Tascam 8-track. It let you record 8 separate tracks, but only 4 at a time. Which is why these tracks sound the way they do.

At times, you’ll find drums, bass, AND something like acoustic guitar — in mono. And, with there being only eight tracks available, the erasure of Anthony’s parts was an unfortunate certainty.

But, that’s the dilemma our stalwart sound engineer, Rob Smith, faced: getting a band with a big sound recorded with such limited means, not to mention the insistent nature of circumstance. 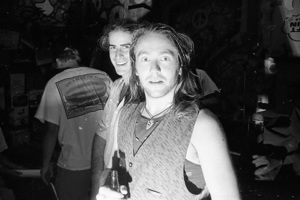 With that in mind, let the listener be kind.

P.S. You just might want to visit this blog tomorrow. If you are a longtime Native fan and you look at a calendar you might have some idea why…