John Epstein, Native‘s funky, non-sequitur spouting keyboardist came up with a word to describe moments there are no words for — shmoont.

It’s the perfect catch-all word, neither fish or fowl, noun or verb, Earth-based or non-Earth-based. And since all those things could be equally applied to Mr. Epstein himself, the term not only stuck, it became a part of our everyday lexicon.

“What did you think of that guitar solo?” “Shmoont.”

“How are we going to get from Buffalo to Bar Harbor in twelve hours?” “Shmoont.”

“Is that a truck heading straight for us?” “Shmoont.”

The general reaction to John’s departure was a mixture of grief and relief that can only be summed-up by the wonderful expression he invented in the days before his departure from our happy little dysfunctional-family in the late spring of 1995.

It must be said that Native was set back on its heels by his absence. We spent an unsettled summer playing keyboardless shows in our five-piece formation, but in many ways  it was good because it kicked us all into a higher gear as we tried to balance the loss by upping our individual games: Mat & Woody really turned into a true songwriting machine; I took drum lessons; Matt Lyons & Liz Jaimes were quickly becoming Matt & Liz Lyons; Fitz was ensconced at Marmfington Farm, determined to turn our rehearsal space into a recording space; Karl’s posters became even more elaborate and evocative.

We knew, however, that there was something missing in our sound — Mike, especially, was desirous of that carpet of organ riding under everything like a magic carpet.

‘Twas at that time that the heaven’s parted and, lo — a keyboardist of extraordinary prowess stepped among us, took that empty seat in the van and became known to all the world as John Watts.

To which, we all simultaneously commented — “Shmoont!!!!!!” 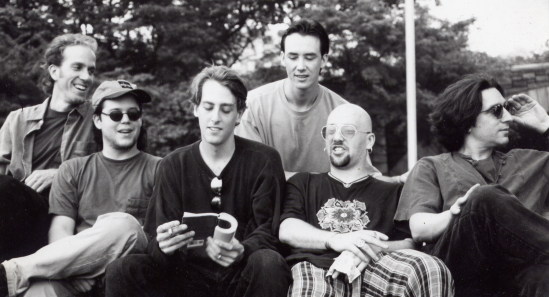 In no time at all, the estimable Mr. Watts was familiar with every song in our playlist (although, it was at this time that a quite a few older tunes from the Anthony Balsley era were sadly dropped).

Fitz attained a newer model of TEAC’s 8-track cassette recorder, and off we flew into a new series of demos, starting with today’s selection —